Essential Flamenco Recordings. 2003 compilation featuring 16 key works from a virtuoso of the Flamenco guitar.
A perfect introduction to both the musician himself & the genre in general. Detailed liner notes including
comprehensive biographical & musical data.

Paco Peсa brings the true spirit of flamenco to audiences all over the world.
As guitarist, composer, dramatist and mentor, he builds inventively on the deep foundations of flamenco.

His imagination, dedication and skill constantly renew this archetypal Spanish art form.
He expands its horizons, yet never loses touch with its visceral emotion.

Paco Peсa embodies both authenticity and innovation in flamenco. As guitarist, composer, dramatist,
producer and artistic mentor he has transformed perceptions of this archetypal Spanish art form.

Born in the Andalucian city of Cуrdoba, Paco Peсa began learning guitar from his brother at the age of
six and made his first professional appearance at the age of 12. In the late 1960s he left Spain for
London, where his recitals of flamenco music captured the public imagination.

Venues for his solo performances have included the intimate Ronnie Scott’s Jazz Club and the
monumental Royal Albert Hall in London, New York’s Carnegie Hall and the Concertgebouw in
Amsterdam. He has shared the stage with fellow-guitarists, singers and instrumental groups, bridging
diverse musical genres, including classical, jazz, blues, country and Latin American.

In 1995 The New York Times declared that: “Mr Peсa is a virtuoso, capable of dazzling an audience
beyond the frets of mortal man. He combines rapid-fire flourishes with a colourist’s sense of shading;
this listener cannot recall hearing any guitarist with a more assured mastery of his instrument.“ It
should come as no surprise that readers of America”s Guitar magazine judged Paco Peсa Best
Flamenco Guitarist of the Year for five consecutive years.

In 1981 he founded the Centro Flamenco Paco Peсa in Cordoba, later becoming Artistic Director of the
Cуrdoba International Guitar Festival. Plans are underway for a new educational initiative in Peсa’s
hometown, complementing his work as the world’s first Professor of Flamenco Guitar, a role
established in 1985 at Rotterdam Conservatory in the Netherlands.
Tracklist: 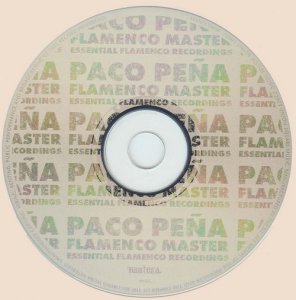 Track 6
Filename C:\06 - Santo (with The Academy of St. Martin of the Fields Chorus).wav

Track 8
Filename C:\08 - Gloria (with The Academy of St. Martin of the Fields Chorus).wav